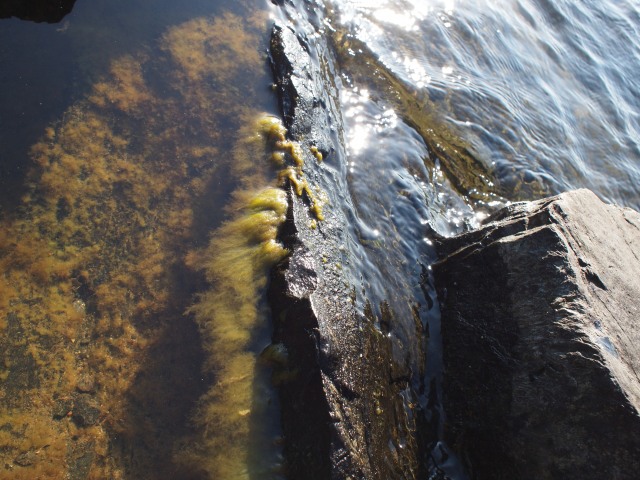 As much as I love the beach, my preference is on the shore, rather than in the water.  (Or in a canoe; I love to paddle.)  The dog is with me on the shore for the most part, because dogs aren’t allowed on the sand beaches.  They are allowed to swim in the areas off the rocks.  Or, in the case of our water-reluctant hound, to be carried out in the water, and dropped in to swim back to shore.

His first few attempts looked very similar to a wobbly canoe, but that was probably due to his odd habit of trying to lift his rear leg while swimming.  Enough to throw anyone off balance, really.

He did get the hang of it after numerous dunkings.  He knew to navigate over to the rocks on the left, but he never did learn to use his tail as a rudder.  He would be very frisky after (ever seen a frisky basset?  funny!) because he would be cool and wet.  After the swim, we’d head back to the campsite, where he would fall fast asleep, because after all, swimming is hard work when your legs are that short and your ears create extra drag!

This entry was posted in dog, travel. Bookmark the permalink.